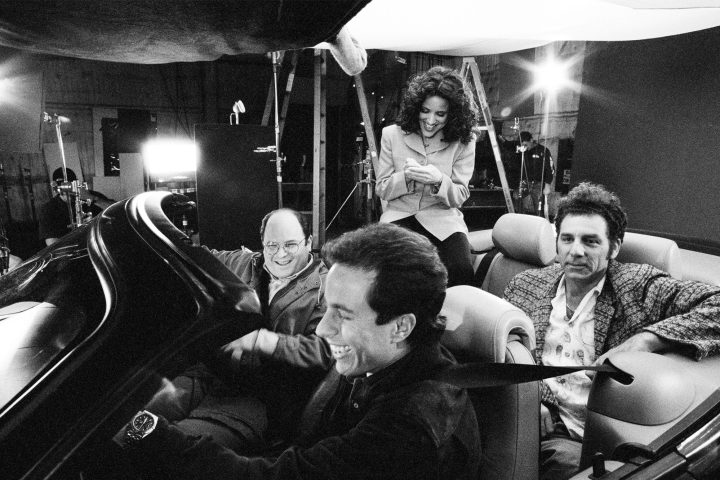 **Disclaimer: if you have known me for any length of time, you know that Seinfeld is my favorite show of all time. So, be warned, this is an extremely biased post. **

I canceled my Hulu subscription, to the grand disappointment of my sister I’m sure. But there was nothing to watch on there. Or rather, there wasn’t the show about nothing. I logged in and saw that Seinfeld was gone.

That was the end of my Hulu adventure.

I don’t have Netflix either. But I can quote almost any line out of the nine seasons of the show, so I think I’ll pass on subscribing. I didn’t realize, however, that Seinfeld would get such critique upon its arrival to Netflix. NPR recently published an article about the “5 challenges ‘Seinfeld’ faces in connecting with viewers on Netflix.” I clicked, curious to see what reasoning could be brought as an argument against the show.

And then I laughed.

The first reason? “It’s about characters who pretty much know they are awful people.”

That’s why it works so well. It’s about selfish friends who go through life thinking things are all about them. Kind of like we all do, in some form or fashion, whether we like it (or admit it) or not.

Another reason was the lack of diversity in the cast. That, I can admit, is pretty true (the horrible fake accents from the few diverse characters in the show is… soooo ’90s). But when compared to other sitcoms of its time (Friends, Fraiser, etc), Seinfeld pretty much sets the stage for diversity.

Seinfeld was the first television show in America to casually and publicly discuss issues likes female contraception, disabilities, homosexuality, religious and political divides, and even AIDS. Regardless of your views on those social issues, the fact that a seemingly senseless sitcom could be the first one to open the discussion in the American media entertainment realm is pretty impressive.

Linguists Elizabeth Magnotta and Alexandra Strohl used the Incongruity Theory of humor to analyze the show’s success. “The Incongruity Theory claims that humor is created out of a violation of an expectation. For humor to result from this unexpected result, the event must have an appropriate emotional climate, comprised of the setting, characters, prior discourse, relationships of the characters, and the topic.”

Through this study, Magnotta and Strohl noted that “this sitcom uses incongruous concepts and events in the given situations as a way to make social commentary on human nature.”

And yet, while Friends and other ’90s and early ’00s sitcoms had international success, Seinfeld did not. When I moved to France, French people would ask me all the time if I liked Friends. When I shook my head and mentioned Seinfeld, they were both semi-shocked and confused. I tried to explain. “It’s kind of like Friends… but not really,” I would say.

Jennifer Armstrong, author of Seinfeldia: The Secret World of the Show About Nothing That Changed Everything, wrote an article for The Verge in which she admitted that “more so than the average American sitcom, Seinfeld  has had difficulty reaching global audiences…Its humor, it seems, is just too complicated, too cultural and word-based, to make for easy translation.”

It’s true. I tried to show some of my French friends Seinfeld, and it just wasn’t as funny. Either they didn’t understand the cultural references or the translations just weren’t quite right. Tant pis.

Humor is a funny thing (get it?) because it is so fickle and yet so universal. People love to laugh. But humor drastically varies depending on cultures and generations. Maybe that’s why Seinfeld is being critiqued by a new generation. I’m all for constructive criticism, but I will stand by my statement that Seinfeld is one of the best sitcoms out there.

Enter your email here to receive a notification for all my latest posts! And let me know what you’d like to see next on my blog.