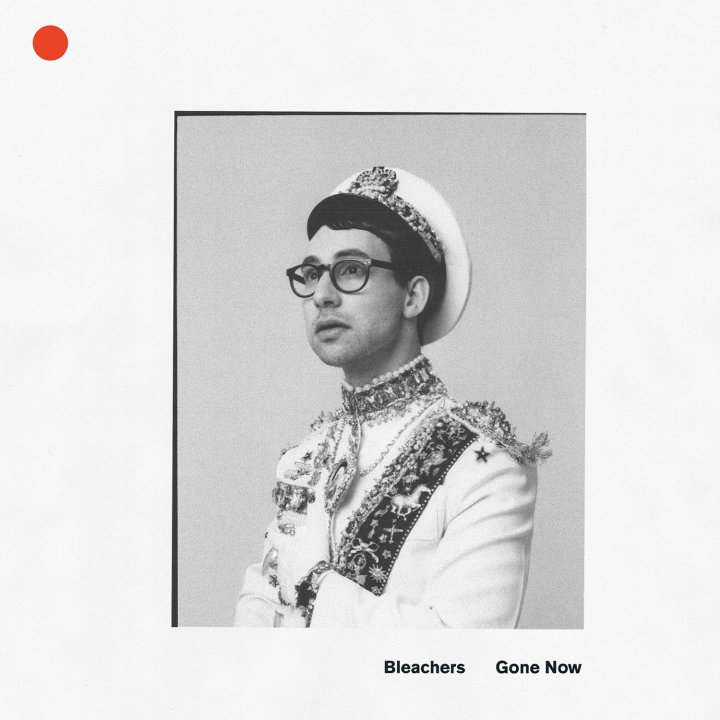 “Your hand forever’s all I want

After watching a super stellar, informative video about 80s music (my favorite genre ever), I came across an artist named Bleachers. With just a sample of his music in the video, I decided to look it up on Spotify, half-expecting a sad excuse for an indie artist. Instead I listened to his entire album twice in one night and bought the CD the very next day.

I have been absolutely gushing about this album for the past two weeks. With it’s totally 80s synth vibes, the album is artistically complex and catchy. Without further ado, here is my brief analysis and review of Gone Now.

This is Jack Antonoff’s (aka Bleachers) sophomore album. It was released on June 2, 2017. There are 12 tracks. The greyscale album cover gives an ambiguous vintage feel to the album (as does the royal outfit he’s sporting).

The album itself is an absolute whirlwind of emotions. The opening track is a mix of strange voices that reappear throughout the album. In many songs the essential 80s drum beat is very noticeable (particularly in “Don’t Take the Money”). The mellow ballads, such as “Nothing Is U”, are very telling of the deep emotional strain Jack was experiencing while writing the album. “Everybody Lost Somebody” is a surprisingly sad song, despite the upbeat pop sound. He speaks of loss (specifically the loss of his sister at the age of 18) and how it is necessary to keep moving on in life. “All My Heroes” shows how Jack can take a cynical point of view and put a new spin on it. Each track is a very intricately composed song that carries the weight of a new discovery in his life.

I think much of the reason this album resonates so strongly with me is simply because it completely, whole-heartedly channels 80s music. I absolutely adore the synth beats, the sprinkling of electronic trumpets, and the intense drum reverb that is repeated throughout the album.

The themes also make it very compelling, especially with the repetition of lyrics. He continuously speaks of heartbreak, loss, anxiety, excitement, change, and depression. His tendencies toward extreme emotions are prevalent in his songs, and I love that he channels them in bizarre lyrics and funky beats.

Fave song: Don’t Take the Money or Goodmorning or Let’s Get Married (there’s just so many great ones I can’t really pick!)

Overall, I give this album a 8.1/10 for aesthetics, flow, and content. While the lyrics can be somewhat confusing and peculiar, the messages he conveys are strong. I applaud his ability to bring back the 80s with a modern, indie pop vibe. I think it will be interesting to see where his next album leads him.

One thought on “Music Moment: Bleachers”